You all should know by now that I have a teeny obsession with body scrubs and shower gels that are all natural. Teeny might not describe it all that well, but who cares 😛 I visited the Saturday Good Market last weekend with a good friend of mine and although the whole event was coming to an end I managed to snag this from an all organic and natural products stall. I should have stayed away but…

I’m also a sucker for scents and this one smells super ahhh-mazing! The lady at the stall just opened the tub for a whiff and that was pretty much all it took for me to say “Okay, I’m getting that!”. So yes, the body scrub is made of all natural and organic ingredients produced and made in Sri Lanka. This scrub in particular includes aloe, sea salt, clay and of course lemongrass essence. You can literary see the sea salt in the scrub which actually surprised me. 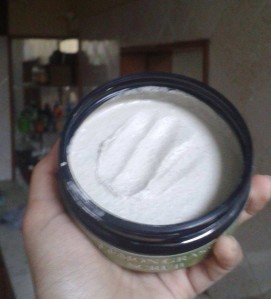 So far I’ve just tried it on my arms and I do love the sea salt and aloe working themselves on my skin. I did not however think all that much about how my skin felt and also smelt afterwards. There was not much of a lemongrass scent on my skin which left me feeling a little disappointed and also, my skin did not feel all too soft and supple.

The tub costed Rs. 1,000 which is pretty darn decent but I do not think it’s something I’d repurchase or recommend to anyone simply because I do not see it showing any results after one use.

Was invited for the weekly Tittle Tattle high tea fashion show at the Hilton Colombo yesterday and here are a couple of pictures I was able to snap. The sarees were by Sona Mandhir. 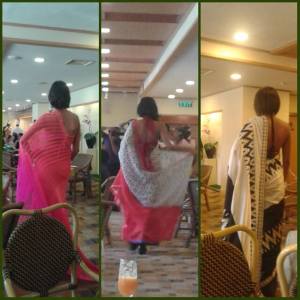 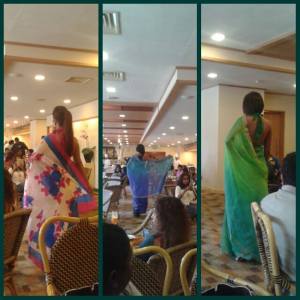 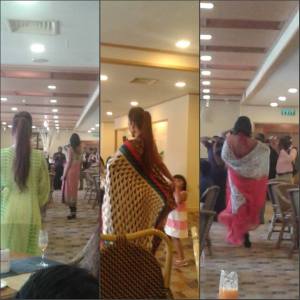 Sometimes I tend to do things without realizing. Like organising. Yes, I organise my things without me realising and I actually quite like it when it happens. I noticed the other day I had organised a few bits and bobs and thought I should share the tips with you all.

I had this little rectangular basket in one of the bathroom cupboards. I didn’t realise that I had stored all my little sample tit bits and travel sized lotions, hand creams and shower gels in it. So here’s a step by step guide as to how I re-organised them just for you all to see. Oh, I’ve got a mini candle in there too, a face exfoliating thing (I think I’ve used it only once or twice), an extra travel toothbrush, hand sanitizer, a soap bar and a tub of Vaseline. I find that they all fit inside quite well and was easily stored without looking too shabby.

Now, this I know I put together with a lot of thought because I do value all the products I’ve bought and also received by Spa Ceylon. Yes, I have quite a few things and yes, I do use nearly each and every one of them. On the far right I’ve placed all the hair care products in this floral jewellery holder. The middle includes all the foot care products like my favourite foot mist with peppermint! The left holds the two foot soak tubs and the centre front part holds travel sized shower gels, a body scrub and a compress which I am yet to use with one of the bath and body oils.

Now this is something I’ve made use of instead of just hoarding it somewhere in my closet. I got a gift set from Victoria’s Secret and the products came in this vibrant pink heart-shaped case. Once the products were used up, I didn’t quite know what to do with it so here’s how I’ve organised a few other essentials of mine. I’ve got an extra face scrub in there along with a scented candle (lavender my favourite!), my L’Oreal eyes and lips makeup remover, and my lavender bath salts. See how pretty they look, all organised together 🙂

I hope this somewhat gave you all an idea as to how every day items can be used to organise other bits and bops around your space.

Was it just me, or did pretty much everyone look their best at the Oscars?

Now, I’m not one to keep my eye on who is wearing what, but I couldn’t help myself when I noticed two stars wearing couture designs by one of my favourite couture designers, Elie Saab!

How gorgeous is this couture design? I think the colour is something unique to the Oscar red carpet; it certainly suits Stone’s skin tone and accentuates her ever curve oh so perfectly.

She does look like a princess! I love the flowy bottom half and the colour of this couture design on Lopez. Of course, I am also in love with the intricate detailing on the waist and upper half of the dress. It does add a touch of glitz and glamour. Personally, I believe this tops the best dressed list of the night.

Headed out for an early breakfast with a good ol friend this morning and here’s what I wore: 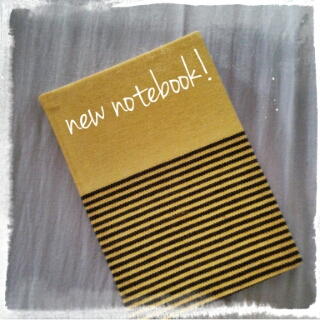 Bought myself a new sunshine yellow notebook from the Barefoot Gallery. I run through notebooks like baby’s on diapers so I ran over to Barefoot cuz they have some of the most colourful ones in town. This one cost me just Rs. 675. That’s less than $6. Of course it took me a good while to pick this because there are multiple choices in terms of colours. Anyways. .I’m happy with it and can’t wait to put it to use 🙂

The images alone are making my stomach growl in hunger all over again! Okay..so I snapped these images when I went out to lunch on two occasions but at the same place – first with a friend and second with my mum.

Ginger is a fusion food restaurant located by the Cotton Collections outlet in Colombo 7. Although I had been to the area on multiple occasions, last week was the first time I dined there.

On my first visit, I ordered a pasta which I thought was the simplest meal I could order on my first try. I do like Thai food very much and the description of the dish mentioned a red curry chicken so I couldn’t let it pass. I did like the flavour of it with the pasta although I wish the chicken had been cooked for just a couple more minutes. Would I give it another go? Yeah…probably.

On my second visit with my mum, which also happened to be valentines day, I ordered the garlic seafood rice. Now, I really expected the flavour of the rice to be at least slightly garlic-y… but it wasn’t. The dish was like having a nasi goreng instead, which I very much enjoyed but felt that the name was deceiving. Would I try it again? Yep, most definitely.
Xoxo

Spa Ceylon, Sri Lanka’s premier spa lifestyle brand, has been once again recognized for their exceptional innovation and service in the international Spa Industry by being nominated for the World Luxury Spa Awards, for Service Excellence, with the nomination of WHITE By Spa Ceylon for the World Spa Awards 2015.

The World Luxury Spa Awards promote official spa participants amongst 141 countries for a period of 1 year in order to create maximum awareness. “We have been nominated to receive an Award in the Luxury Ayurveda Spa Category for Service Excellence and we are indeed gratified that once again Spa Ceylon has put Sri Lanka on the international map”, said Managing Director Spa Ceylon, Shiwantha Dias.

Backed by substantial marketing and promotional campaigns, The World Luxury Spa Awards promotes its participants on a global scale by means of an online spa profile hosted by the World Luxury Hotel Awards website, featuring in the Ultimate Spa Guide and media coverage, as well as networking opportunities with our established sponsors and partners. The ultimate goal of these awards is to raise service standards within the Luxury Spa industry and to create awareness in the global market. “To provide luxury spas with well-deserved recognition based upon votes from guests, provide the possibility of a fresh stream of spa customers, providing spas with extra credibility as well as giving staff the recognition they deserve thus improving staff morale is the aim of these awards”, said Ms Marinique de Wet, Director of World Luxury Spa Awards.

“Spa Ceylon’s guests could vote for us online. Votes will be based on service. No other areas will be taken into consideration other than excellent service delivery”, said Shalin Balasuriya, Director & Co-Founder. 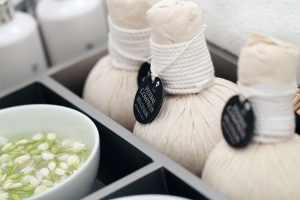 Monday’s can be stressful but in my mind, coffee makes everything all the more better. As many of you already know, I have a second blog – Kopi Katha – that I work on with a bunch of other friends and I thought it would be fun to highlight one of the posts that discussed lesser known facts about the global coffee industry.

To help gauge how much coffee is being consumed, here’s some simple mathematics. 1kg of roasted coffee can be used to make 60 cups of high quality coffee. However, if we were to make regular quality coffee, we can push that number up to about 144. In 2012 (latest stats available), global consumption was at 142 million 60kg bags. Take another sip of your coffee as you work out the staggering numbers.

If you want to read on follow the link and do subscribe to the blog for weekly updates!

Thanks and have a great week ahead 😀