Defines who I am

The internal bruises, the scars

Are a definition of my emotions 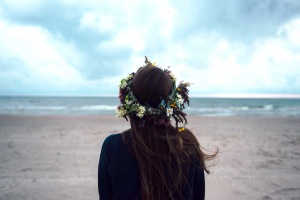 What does it matter

When it all comes to an end?

Who am I without the hurt?

This is my beauty

My emotions are all over the place right now and I don’t know if I’ll make sense. It’s purely thoughts scrammed in my little brain and thoughts that have consumed my heart. Last night – was hard. It was harsh and painful. I don’t think I’ve ever cried like that. I have not felt that kind of excruciating pain and aching in my heart ever. It wasn’t an experience. It was no good. I lay there, an hour later, exhausted and feeling completely consumed by saddened emotion. I don’t know what came over me. I lay on the ground, unable to breathe normally and unable to move a muscle. I lay there, staring at the door, the ceiling, the wall…just staring. I thought I’d at least feel some void, some emptiness but it didn’t come. Only hurt arrived at my door. And pain. Two uninvited guests. I dislike them very much. But then, what choice did I have but to welcome them into my body, mind and soul? None at all.

That feeling of some part of you being taken apart? Yeah, that kind of pain. Worst part? I should have seen it coming. 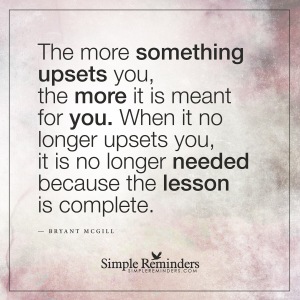 Do you think this is true? I’m a little unsure…..

I’ve come to sort of ignore a few issues in life cuz they upset me so much before. Now I feel like I’ve become stronger so they don’t upset me as much.

Is my lesson complete?

On a random hour of the day, I’d lay a mat on the floor, lie down and do a bit of thinking.

I think of the good things in life, happy and fond memories. I’d also come to realize that a few of these happy memories tend to hurt.

There’s an ache in my heart and somewhere deep within in me I’m in pain. Deep nostalgic pain.

It hurts to think of friends who’ve migrated or I’m not in touch with anymore. I ache recalling the long phone calls and endless laughter over stupid things. It saddens me to remember the little sweet things we’d done together.

It’s all come to an end.

And the happy memories do hurt. 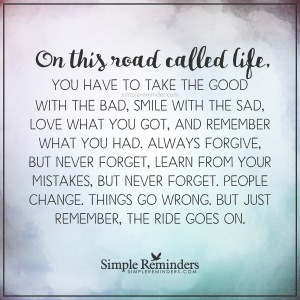 Yet, life goes on.

The ride goes on

The ride goes on.

The journey goes on.

The ride goes on.

Is marriage important in today’s age and time? I find that the answer to this question is really complicating. Putting aside what religion says, is it really a necessity?

Too many friends (couples) and family members (married folks) seem to be falling apart nowadays and obviously it makes one question if marriage is all that important. “Marriage has almost become a negative term today. In our days and age, we married out of love, out of necessity and out of respect. But today’s generation has it entirely wrong. People fear the word marriage because they feel like it ties them down. Going into a marriage with this sort of fear is not going to help strengthen the relationship and bond between a husband and wife. It’s only going to cause tension and doubt,” said Kathy (62)

The thing about fear is spot on. Today’s generation is afraid of getting married. The life-long commitment, staying true to one another, the responsibilities, managing finances, thinking about starting a family and so on are serious concerns. Of course, there is no guarantee that every marriage will work out but that’s what makes marriage so special – the need to constantly work at it to keep it strong.

Married couples in the yesteryears kept their marriages afloat and strong with sheer love, determination and a lot of hard work. Two individuals coming together isn’t entire a blissful combination. That is why marriage takes a lot of effort. Couples strive to keep love alive by making sacrifices, compromising when the necessity arose, by respecting one another, and also vowing to be there for each other in both difficult and good times.
“It isn’t the case today because people have become quite selfish. I find that people only think about themselves and what they want in life. But in a marriage, it should be about both individuals. If it comes to a point where you’re only thinking of yourself, then you need to get out of that situation,” said Sam (27).

So again, why get married in the first place?

“If you happen to find someone compatible, someone who understands you and loves you for who you are, then go ahead and get married. But if you’re looking at the wrong reasons – for financial gain (as an example) – you’re going to be one unhappy soul. You’re going to be miserable and constantly arguing so why put yourself through all that? I somewhat agree on a live-in relationship beforehand in this case because then you’d get to know what it’s like to constantly be in each other’s space before taking that big step in life towards marriage,” confided Shehan (30)

As much as it’s a taboo in our society and culture, today’s generation does opt to live with their partners before getting married….or not get married at all. It’s almost like being married but not just quite there. What’s convenient about live-in relationships is that one can walk out on the other if he or she wants to. There’s nothing to hold you together and people tend to find that (as confusing as it is) comforting. They want to be able to know they can leave when the going gets rough or when they feel like this isn’t what they signed up for. For people with that kind of mind -set, marriage is out of the ballpark. A live-in relationship is a safe bet.

What about starting a family and growing old with someone you love and who loves you? “People can still do that. People ARE doing that even without being married. It’s not so much a taboo for two people to have a family without being married anymore. Yes, there is talk about the community and society but today’s generation are a bunch of tough cookies. They don’t really care about what the community, society or (sometimes) even what religion says. They are the new generation that gets to keep the cake and eat the cake too,” said Shanya (28)

Marriage does not guarantee a lifelong relationship but sticking to the religious and cultural aspect, both individuals have to work it through. If you’re going through a rough patch, the immediate thought shouldn’t be divorce or separation. These two words should be out of the equation. When you do that, what’s left is to continue to work harder at making a marriage work. Each day is going to be a lot of work; you have to go through the good, the bad and the ugly to really come into your own.

“I don’t like a lot of things about my wife. Her messiness irritates me. She can’t cook to save a life and she has this annoying habit of misplacing things. But that does not mean I do not love her any less. I love that she’s unlike any other woman I’ve known.

I love that she ‘tries’ to make the bed look less messy when I get back home from work and ‘pretends’ to have cooked a meal even when I know its takeout from a cafe. The fact that she does those little things for me makes me love her even more. I’m not a perfect individual either and I know she deals with my shortcomings the same way. That’s really what marriage is all about,” said *Anushan (34).

**As published in the Ceylon Today newspapers** 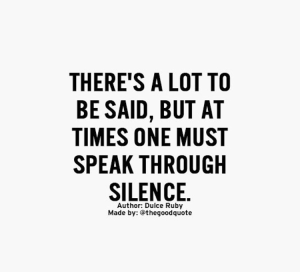 Too much on my mind…